Spending the Fourth in Philly

Happy July! What are your plans for the Fourth this year? Whether you’re joining in on Philly’s festivities or having a chill backyard barbecue, there’s a ton to choose from here in the city where it all began! 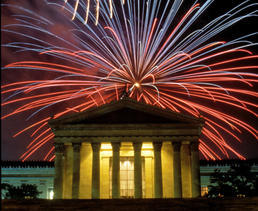 Free Things to Do for Independence Day in Philadelphia

The celebration is going on all week and Friday is when the party really starts, with the (free!) Liberty Block Party on 5th and 6th streets between Market and Chestnut. The Block Party will run from 1pm until 8pm Friday and feature live music and food. After that, head over to the POPS! on Independence, which is a free patriotic concert with tons of talented performers. POPS! will be at 6th and Chestnut, right on the steps of Independence Hall.

Kick off the holiday on Saturday with the annual Independence Day Parade throughout Philly’s Historic district, which will begin at Independence Hall and continue down Market Street to the Delaware River. From 12pm-7pm, Party on the Parkway with fellow Philadelphians and enjoy food, free music and tons of games and entertainment. At 7pm, catch The Roots and other artists for a highly anticipated concert, which will finish off with the best fireworks show around.